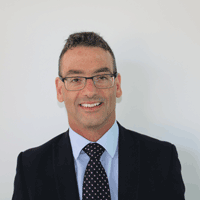 Board of Governors Member

He previously served as acting Director of Education. During his career at Education he taught mathematics at Bayside School, and was then promoted to Education Advisor with special responsibility for scholarships and higher education. He subsequently served as Senior Education Advisor, charged with the task of delivering on significant changes to education in Gibraltar which are now well underway.

Darren graduated in mathematics from the University of Leicester in 1990, completing an additional Masters in Computer Science grounded on the mathematics and logical patterns of expert systems. He completed his teaching qualification at St Mary’s College, Twickenham and has obtained additional professional qualifications in Special Educational Needs and Leadership in Education.

Darren is also an avid open water swimmer and is currently the president of Bluefin Open Water Swimming Club; he is the chairperson of the charity “A Pathway Through Pain”. In his little free time Darren enjoys family life and reading, especially poetry.