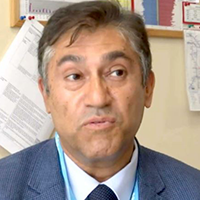 Head of School of Postgraduate Medicine

Dr Sohail Bhatti qualified in Medicine from Glasgow University in 1985, commencing a clinical career in Scotland and northern England. He subsequently decided that his passion was to prevent illness rather than merely patch people up, and entered training in the specialty of Public Health in 1989. He obtained his MSc in the same subject in 1994 from Manchester University. He became a Member of the Faculty of Public Health in 1997, and was elected Fellow in 2006. He is Fellow of the Royal Society of Public Health, Royal Society of Medicine, and also the Chartered Management Institute and became a member of the Faculty of Medical Leadership and Management of the Academy of Medical Colleges in 2012.

After a number of NHS Consultant positions in northwest England he became Director of Public Health (DPH) for Huddersfield, West Yorkshire in 2002. He has held DPH positions subsequently in East Lancashire, City of London, the London boroughs of Hackney and Hounslow, as well as the City of Bristol. He took up his current position as DPH in Gibraltar in Nov., 2008, and is also the Chair of the regulator of all non-nursing clinical specialists, the Medical Registration Board in the territory. He was an Honorary Research Fellow between 1997-2007 for University College, St Martin’s (now Cumbria University), and has taught both undergraduates and postgraduates at Manchester, Liverpool and latterly Newcastle University. He was part of the EU funded (TEMPUS III) programme to modernise the public health infrastructure of former soviet republic of Kyrgyzstan and a Board member of the Nationwide Children’s Research Centre of the University of Huddersfield.