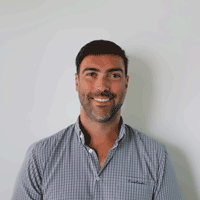 James Jude Vinales qualified as a registered nurse (Ad Diploma in Nursing – Adult) in 2000 and then completed a B.Med.Sci Nursing (registered nurse – children) in 2001, both at the University of Sheffield. James worked in England, Gibraltar and Melbourne (Australia) as a Registered Nurse before pursuing a career in higher education. In 2008 James completed his MA in Nurse Education (University of Brighton) as part of the School of Health Studies lecturing team.

James then spent 5 years as a Senior Lecturer in Nursing at Birmingham City University (formerly The University of Central England). During that time James was able to enhance his knowledge of higher education and develop his teaching skills and management of educational programmes within higher education. James was the BSc (Hons) in children’s nursing deputy programme lead at Birmingham City University until he left to return to Gibraltar in 2012.

James returned to Gibraltar in 2012 as Senior Lecturer for the School of Health Studies before being promoted to Principal Lecturer in 2015. James led the Diploma in Nursing and the BSc (Hon) Adult Nursing as well as being the module leader in Gibraltar for the Mentorship for Practice module (delivered as part of Kingston University and St George’s, University of London, at Level 6 and 7). He was also part of the team working with the QCF L3. During this time James completed his MSc Leadership and Management (Health) with Kingston University and the Royal Holloway of London.

James joined the University of Gibraltar in 2019 to become programme coordinator on the BSc (Hons) Adult Nursing and Diploma in Nursing (Enrolled Nurse programme). James also leads on the Mentorship for Practice module which is delivered to school teachers / nurses who support, guide and mentor PGCE / nursing students.

James currently holds the post of Head of School (Health Sciences) at the University and is responsible for overseeing the delivery of the BSc (Hons) Adult Nursing, Diploma in Nursing, MSc in Applied Clinical Psychology (online), MSc Sport and Exercise Nutrition (online) and the Access to Nursing.

James sits on the following Committees / Boards at the University;

James is on the writing up stage of his PhD on Mentorship, including mentors formal preparation and mentor support in healthcare practice.

James’ main research interest lies in student support, mentorship and preceptorship within education and healthcare settings. James is currently working on a research project about Mentorship support for mentors in Gibraltar as part of his PhD in Education at the University of Birmingham.