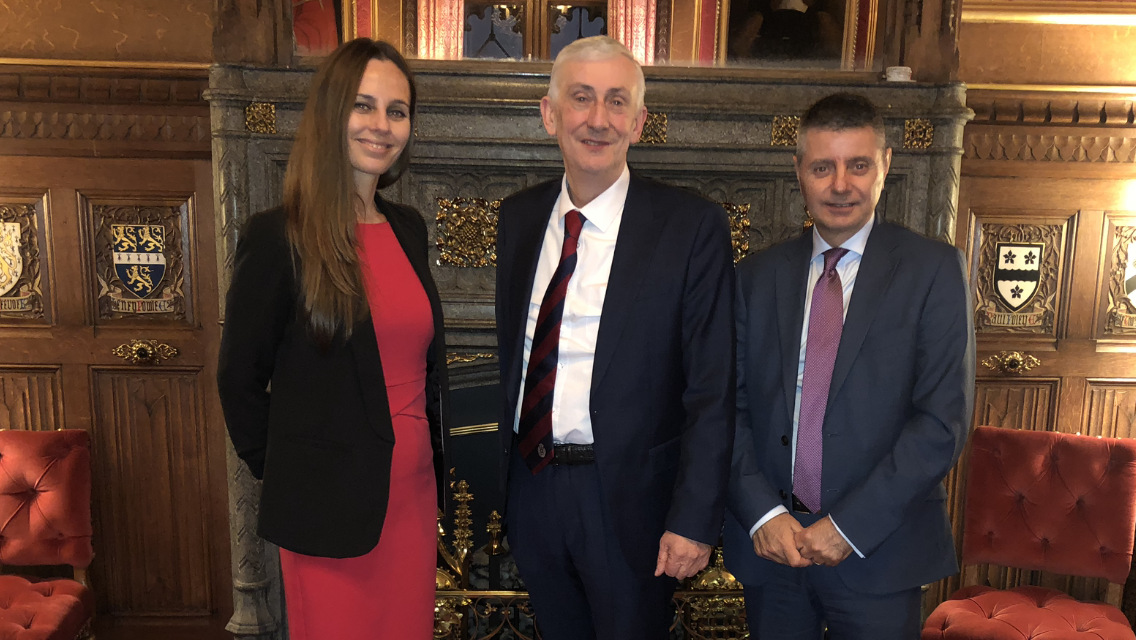 From left to right Keri Scott, Senior Education Advisor, Sir Lindsay Hoyle MP, Chancellor of the University of Gibraltar and Speaker of the House of Commons, Gilbert Licudi QC MP, Minister for Education.

The University is delighted to announce the appointment of Sir Lindsay Hoyle as its new Chancellor.

Sir Hoyle has been appointed by Gibraltar’s Minister for Education, Gilbert Licudi QC.

Sir Lindsay Hoyle says he is “honoured beyond belief” at being appointed Chancellor of the University of Gibraltar. The House of Commons Speaker said the small, narrow peninsula in the southern tip of Europe had “always held a special place in my heart”.

“To become Chancellor of this magnificent university in a place I have an acute interest in is a privilege I will treasure for many years to come,” he said.

Sir Lindsay succeeds Lord Luce who was the first Chancellor having held the position since 2015.

“Not only have I, and my father Doug, had a long association with Gibraltar, but it is one of the UK’s overseas territories to which we owe a great duty of care. I want to reinvigorate our relationships with the overseas territories and some of Britain’s most remote outposts – to show them how important they are to us in Westminster.”

“I can’t wait to visit Gibraltar again – and to accept this huge honour of becoming its next University Chancellor.”

Mr Licudi said Sir Lindsay “has been a great friend of Gibraltar for many years. We could think of no better person to take over from Lord Luce – our first Chancellor – who has been a great source of advice and assistance since 2015.”

Current Speaker of the House of Commons

Sir Lindsay was elected as Speaker of the House of Commons in November last year and has visited Gibraltar regularly during his career.

He first became interested in Gibraltar after three pensioners from his Chorley constituency were held at the border between Spain and the Rock while on holiday.

Professor Catherine Bachleda, the University’s Vice-Chancellor, said: “It is an enormous privilege for the University to have Sir Lindsay Hoyle as its Chancellor.” Adding, “The University has seen extensive growth over the last four years. It now provides a range of quality undergraduate, postgraduate and professional development programmes and is achieving international recognition through its work and partnerships with renowned and well-established institutions.”

“I am delighted with the appointment of Sir Lindsay Hoyle as Chancellor as we move to the next phase of the University’s development.”