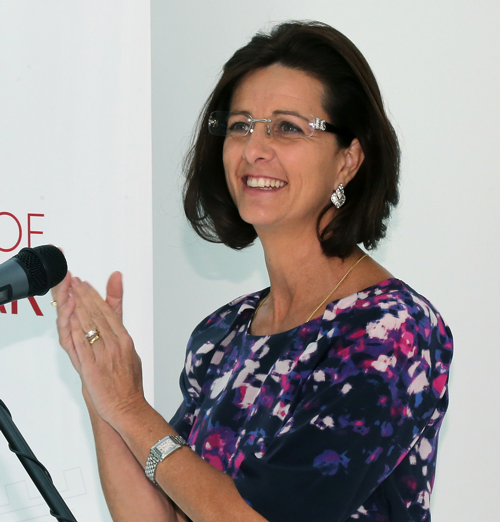 At the opening of the University in 2015, Professor Tilbury stated: “Starting with a blank canvas allowed us to create a University that can respond to global issues as well as priorities of relevance to our locality. Our research will make a meaningful international contribution to Gibraltar, the Mediterranean and beyond. We are not held back by outmoded traditions or bureaucratic structures and thus we are able to respond quickly to new opportunities. This freedom enables us to convene cutting-edge thinking, attract talent and trigger innovation, which will inject dynamism and vitality into our society.” – Professor Daniella Tilbury

Professor Daniella Tilbury served as the inaugural Vice-Chancellor and founding CEO of the University of Gibraltar. She was involved in the establishment of the University in late 2013 when she was asked by HM Government of Gibraltar to conduct a feasibility study into the viability of higher education provision on the Rock. She laid the foundation stones for the University’s academic pathways and developed its research provision, playing a key role in setting up its PhD flagship programme.

Under her leadership, the University also established Key Advisory Groups that gave a voice to local professional, government and community stakeholders in the development of provision especially for the newly established Institute of Professional Development. From the start, she recognised the importance of engaging the local community in the work of the University – especially the over 60s who had not had an opportunity to experience University in the days when access to higher education was limited. This led to the popular Gibraltar History Lecture Series.

With the support of the Board of Governors, she brokered international partnerships with esteemed universities that are recognised globally for their academic excellence and entered into formal partnerships with various sporting, business and community organisations. She worked closely with her UniGib team to establish that the academic tuition and student support systems that over time will ensure that graduates received awards that meet international standards and were tailored to personal ambitions and career paths. She believed in investing in staff development and supported staff education and travel programmes. She conceived the establishment of the Gibraltar Repository and Libraries Forum.

Supported by the Chancellor, Lord Luce, she established a Gibraltar Commonwealth Scholarship Programme and hosted the University’s first Commonwealth International Seminar. Key to her strategic vision was the embedding of work placements for all undergraduate degree students and for each year of study, She was committed to preparing graduates for the future and who could have a competitive edge in the employment market.

Prof Tilbury was engaged in a process led by the Gibraltar Regulatory Authority that proposed regulatory mechanisms for the University and the extensive consultation which led to the University’s first strategic plan. She attracted external funding from agencies for research and development projects as well as from the corporate sector and charitable foundations which funded curriculum development of the business degree, the establishment of a student common room and resources for the library. She shaped and led the University’s doctoral degree making it a flagship interdisciplinary programme.

In 2018, the Chief Minister, the Hon Fabian Picardo QC expressed gratitude for her significant contribution to higher education:
“l would like to congratulate Daniella on her new role and thank her for the important part she has played in the establishment of the University of Gibraltar over the last five years. Daniella first became involved in December 2013 when she developed the feasibility study. She has been instrumental in the construction of the University’s offering, the development of the University’s first strategic plan as well as the establishment of financial viable pathways for the institution.”

In 2018 the Chair of the Board of Governors of the University also acknowledged Prof Tilbury’s important contribution:
“The University of Gibraltar is proud of the significant progress made, and the numerous achievements attained, since its opening in September 2015, and gratefully acknowledges the contribution towards this progress and these achievements by Prof. Daniella Tilbury who has led the University during this important initial phase. The University is now well established to serve its community and looks forward to continuing its commitment to high quality teaching and learning, and world-leading research. Prof Tilbury’s new challenge, is an exciting next step in her career and one for which she is uniquely qualified, The University thanks Prof Tilbury for her commitment and leadership as its first Vice-Chancellor and wishes her every success in her new role.”